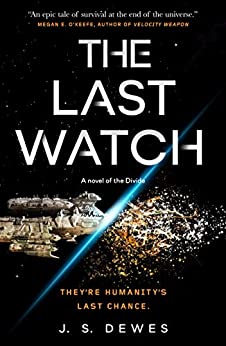 The Last Watch by J.S. Dewes

This action-packed sci fi book takes considerable time to acclimate yourself to what’s really going on- but it’s well worth the wait for the larger revelations as to what may be causing the shrinking of the universe, the corrupt politics of both the militaristic state and opportunistic royal families, as well as the moving backstories of the main characters which helps you finally truly care about them.

Welcome to The Divide- the edge of our universe, which for millennia has stopped expanding and now seems to be shrinking and collapsing back on itself. In the process, it’s destroying the Sentinels and their fleet, who has been stationed at the far reaches of the Universe to keep a lookout for the return of the Viators, an alien race that humanity battled for thousands of years before supposedly them killing off. The Sentinels are a ragtag bunch- military officers being punished or outcast with a crew of misfits and the court-martialed. Heading up one of the ships, the Argus, fierce commander Adequin Rake (she) has established strict military discipline to keep her flotilla of bored soldiers in line. A hero in the war with the aliens, Rake seems out of place in exile.

Joining the crew of the shipped is the exiled heir of one of the most powerful royal families: Cavalon Mercer. He’s got three Phd’s in engineering, but his only fighting experience to date has been bar brawls and he specializes in wisecracks. He’s fought against the oppressive greed and politics of the family’s patriarch which has landed him shipped off to The Divide where he cannot cause any more trouble.

Combining Adequin’s leadership and bravery with Cavalon’s intellect and growing loyalty, the survivors of the Argus work to solve the mystery behind the collapse of The Divide and its implications about both the alien Viators as well as pernicious underpinnings in their own reining military government.

By the end, I felt, “Bring on the Sequel!!”- excited to see the deepening revelations and bonds between the crew, and for more thrills in a twisty thriller plot.

Thanks for NetGalley for an advanced reader’s copy. 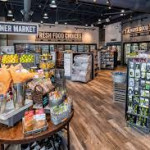 Next article - Matrix by Lauren Groff »
Tweets by @MomCentral
© All rights reserved 2022 - momcentral.com