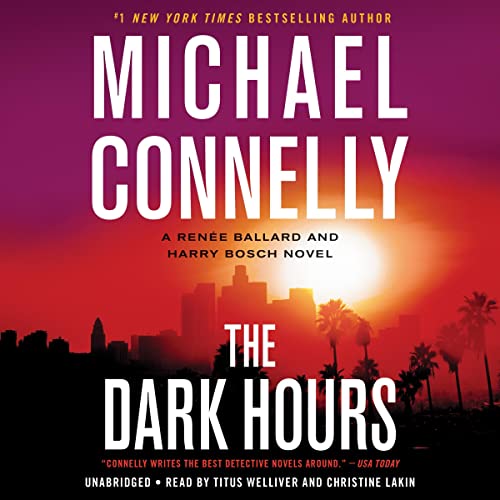 THE DARK HOURS by Michael Connolly

Thanks to NetGalley for providing me with an advanced readers copy

A glorious fourth book featuring Los Angeles Police Department detective Renée Ballard as she works “The Late Show,” the unglamorous overnight shift that most of the detective view as punishment but which Renee embraces wholeheartedly. Once again, Renee has retired Harry Bosch along for the ride as her unofficial advisor, mentor, and confidant. Ballard in turn keeps Harry active in the detective hunt, and has over time internalized Harry’s work ethic, willingness to tenaciously go outside the rules to get the bad guys, and strong internal moral compass.

It’s New Year’s Eve, and Ballard finds herself and her partner Lisa Moore taking shelter beneath an overpass near a homeless encampment as thousands of revelers in street parties fire guns in the air in celebration. Ballard’s on the lookout for a pair of serial rapists known as the Midnight Men who have been attacking and killing women in their homes. In the meantime, Ballard gets called to the scene of the first shooting of the new year where one of these stray bullets seems to have killed the owner of a car repair.

Ballard realizes the auto shop owner, a former gang member who’s turned his life around, has been murdered. A recovered bullet connects the auto owner shooting to an old case of Bosch’s. As Ballard investigates, she fights to hold on to the increasing politicized Midnight Men case that has been gaining media attention amid citizen frustration that the rapists have not been caught.

The Dark Hours takes place during the pandemic, right as the first of the COVID-19 vaccinations came out. The wearing of masks and getting vaccinated has become a hot topic among both police officers and the populace. Ballard, who got COVID and recovered, approaches unmasked citizens and other officers with caution. The pandemic has forced Ballard off her sleep-during-the-day in a beach tent lifestyle, surfing with her loyal dog Lola by her side. Ballard has moved into a condo, hating all the rules and overbearing neighbors, while mourning the loss of Lola to cancer. The novel also covers the January 2021 takeover of the Capitol, as Ballard and Bosch watch the insurrection on TV in consternation and disbelief.

In addition, the ongoing political movement in L.A. to defund the police has dramatically deteriorated police morale at the LAPD and left officers reluctant to intervene unless necessitated. This leads to a police stance of abandoning proactive protection and waiting to react to being called to a scene. Ballard resents both this passivity and fear of taking action leading to a complaint against the police and sees this new attitude of complacency as getting in the way if her solving her cases.

Ballard also slogs her way through misogynist and vindictive colleagues, leaving her at times questioning her willingness to keep her job as a dedicated detective. But she plunges ahead mostly as a loner, resiliently and bravely willing to go all in on her investigations. Through it all, Harry sagely stands ready in the background for moral support and assistance in the investigation – even drawing from copies of his past criminal case files he keeps stored in his house.

The twists and tension that follow leave you breathless and filled with excitement for Ballard’s next outing. 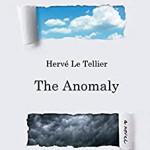 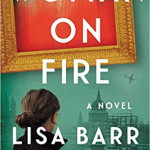 Next article - WOMAN ON FIRE by Lisa Barr »
Tweets by @MomCentral
© All rights reserved 2022 - momcentral.com