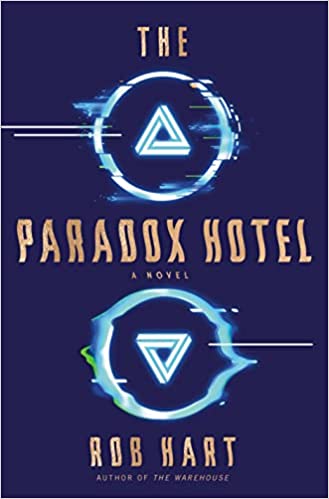 THE PARADOX HOTEL by Rob Hart

Rob Hart has come up with a brilliant funny and thrilling follow-up to his wondrous first novel, The Warehouse. It’s 2072 and the U.S. government has cracked time travel, creating an Einstein Intercentury Timeport, but the facility has been bleeding money. The government has opened it up to uber wealthy travelers willing to pay hundreds of thousands for a firsthand plunge into the past but now believes it needs to be privatized, with governance overseeing that rules of not interfering with the past remain upheld. The Paradox Hotel, a futuristic highly architected hotel, serves as the transit point for departing and arriving time travelers, with amenities running the gamut from costuming to era-specific vaccinations to earbud translators.

January Cole, a former high-level time travel authority agent who successfully caught people trying to smuggle items back from the past, now finds herself as head of security at the Paradox Hotel. She traded down jobs as she’s become “Unstuck” due to all the time travel legs she’s travelled, where her mind now increasingly jumps erratically back and forth from the present to past events to vague fading glimpses into the future. Despite taking drugs to control the flashes, she’s on a pathway that will eventually lead her to lose her mind. As the chaotic plot unfolds, January struggles to separate what’s going on right now in the hotel versus these flashes sending her backwards and forwards in time. She’s often asking Ruby or others if they see anything amiss to gauge her time frame.

You cannot help but fall in love with January who’s bitingly and hilariously snarky and antagonist to her bosses and over-reaching guests. Ruby, her emotive AI drone, rides shotgun around January’s shoulder, giving her inside intelligence on the guests, controlling the hotel’s tech, and taking hut offense at January’s bad attitude when directed her way. There’s a wide variety of hotel staff, ranging from the always-high-on-drugs porter who’s actually a physics particle specialist down on his luck to a transgender clerk at the front desk to cowered hotel managers fawning over the high-paying guests and politicians.

January’s job, already setting her on constant edge dealing with fussy tracking uber-wealthy travelers staying at the hotel and looking out for would-be smugglers, faces a ten-fold increase in stress as the opening day unfolds. The time travel device has been shut down for a day, causing an overload of delayed guests that has the rooms maxed out. January comes across a dead body in a hotel room, slashed across the neck, that seems to be a vision from the future that no one else can see. Delegations of big personality trillionaires, a U.S senator, and their staff start arriving at the hotel for a summit to create bids to purchase the government’s time travel apparatus. Three chicken-size biting dinosaurs are on the loose, having been smuggled in from the Jurassic age perhaps as just about to hatch eggs. The main lobby clock goes on the fritz. A blizzard is approaching. Large segments of the hotel’s video recordings start going missing. Ghosts wander by, from January seeing Mena, her dead beloved girlfriend waitress, still circulating the hotel’s halls, to reports of guests seeing ghost like appearances.

With a potential murder needing to be solved, chaos abounding, the future of all time travel at stake as well as her mental stability, January plunges into action.

Thanks to Random House & Ballentine Books, and NetGalley, for an advanced reader’s copy. 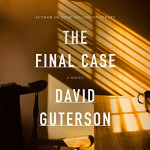 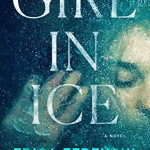 Next article - GIRL IN ICE by Erica Ferencik »
Tweets by @MomCentral
© All rights reserved 2022 - momcentral.com